If a restaurant suddenly has a million people show up, it obviously can’t cater to its customers. Same with running a website. An avalanche of traffic blocks your customers from accessing your online service because the server struggles to cope. Hence, slowing your site to a crawl, making it not function as it should. This is basically what happens with a Distributed Denial Of Service (DDoS) attack. Without Server DDoS Protection, your visitors can’t access the info and commercial services you provide. Or they may experience difficulties with your website’s functionality.

Unscrupulous competitors and malicious delinquents launch DDoS attacks all the time. DDoS attacks are extremely popular among hackers. Because they’re an inexpensive but effective way to disrupt the work of online services, and they often go unpunished. So, you may be wondering, what’s the best server DDoS protection for you? 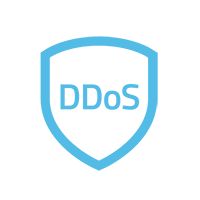 DDoS attacks come in all varieties with strategies like volume, protocol, and application layer attacks. This means your DDoS mitigation software needs to be versatile enough to cope with anything thrown at it.

Volume-based and protocol attacks are like a tsunami that try to flood your server resources and network. In which case, the server DDoS protection filters illegitimate connections from the traffic.

DDoS attacks can be lethal to your business. So choose the best server DDoS protection, like ours, to block all forms of DDoS attacks.

DDoS attacks can be very sophisticated, and it’s not always obvious when an attack’s happening. But the best DDoS protection can recognize and deal with an attack immediately. Moreover, such software can also be a detective, analyzing the attack to reveal the method used.

Traffic is continuously being filtered through Plesk’s DDoS protection appliances. Therefore, you get instant protection when an attack begins. They detect and avert DDoS attacks in 90 seconds or less. Great for you, because the quicker you pick up on an attack, the safer your data is.

Without the best DDoS protection, your server could be down for days. And any business can be attacked, so everyone needs protection.

As technology marches on, DDoS attacks become more sophisticated and hence, more difficult to spot. But the best server DDoS protection is constantly updated, as new info about how attacks evolve comes to light. Plesk aims to always be one step ahead, so our software can turn back any DDoS attack on your website.

The best DDoS protection covers you against all attacks

DDoS attacks don’t just happen to large corporations and governments – the ones you see in the headlines. In fact, 90% of DDoS attacks happen to much smaller players. Thus, the damage they do is just as significant.

For instance, without server DDoS protection, your website could get just 50 bot attacks. That doesn’t sound like much. Your server won’t crash and you may not know there’s a problem. But your page load times may drop by just enough to annoy your customers. Customers who then go looking at your competitors’ websites, meaning you lose money.

The best DDoS protection can protect you from a flood attack of 1Gbps all the way up to 40Gbps. So, if you have a current service provider, then be cautious and check they can do this.

How to get server DDoS protection using Plesk

Plesk Onyx hosting platform has helped system administrators for over 10 years. Use the Plesk server management solution in order to implement across-the-board automation for every web hosting business’ task. Or your daily server-based business operations.

How to Secure Nginx Against Malicious Bots

Preventing the most common security attacks on servers

What DDoS protection tools are available in Plesk

High CPU usage by Apache is shown in Health Monitor