You may remember that we wrote about the opportunity of decentralized storage providers back in 2018 on our blog.

The technology has developed well – and today we’re introducing S3 compatible backup space for your server or website with Storj DCS (Decentralized Cloud Storage) and an integration with Plesk. With Storj and Plesk, backups are a fraction of the cost of other backup and storage solutions. In addition, Storj DCS is 100% decentralized, uses encryption by default to offer enhanced security, edge-based access management for superior privacy, and is also compatible with the S3 protocol. Storj also delivers multi-region redundancy at no extra cost.

Storj DCS (Decentralized Cloud Storage) is an encrypted, secure, and cost-effective object storage service that enables you to decentralize your object data around the world using a simple logical instance.

Storj offers 2 types of operating models on how you can participate in its network:

Decentralized cloud storage is more difficult to attack. On the decentralized Storj network, files are encoded for redundancy, divided into pieces, and spread across storage devices around the world. Each device is a different piece of hardware, in different geographic locations, and is operated by different people.

Storj’s capability-based security model is also more efficient than the ACL model, as there are no central repositories of credentials that could be exposed. Data is encrypted client-side – meaning that only you have the keys to retrieve your data making it almost impossible for a data breach.

Storj DCS is faster and more predictable than competitors due to the way data is encrypted, split, and streamed in parallel. The Storj network uses erasure coding for redundancy so it can distribute file pieces over many Nodes located in different physical locations around the world.

Integrating with Storj DCS is as easy as reconfiguring your existing config files, with no new code needed. It literally takes a few minutes.

The economics of decentralized cloud storage is more efficient than competitors’. Decentralized infrastructure taps into underutilized, or latent hardware and puts it to use in the decentralized cloud swarm. Storj is significantly more affordable than other leading cloud providers such as Amazon S3, while offering multi-region redundancy and encryption by default at no extra cost.

How to use STORJ with Plesk

Note: Whether backing up your server or website inside Plesk using Storj DCS, the process is the same. We focus on how to backup your website into Storj in this article. If you prefer to backup your whole server to STORJ, just use the server level backup manager with the same principles.

3.  On your Dashboard, create your access grants (if you did not create an access grant during the initial setup wizard):

4.   While creating your credentials, select “Generate S3 Gateway Credentials” in the last step: 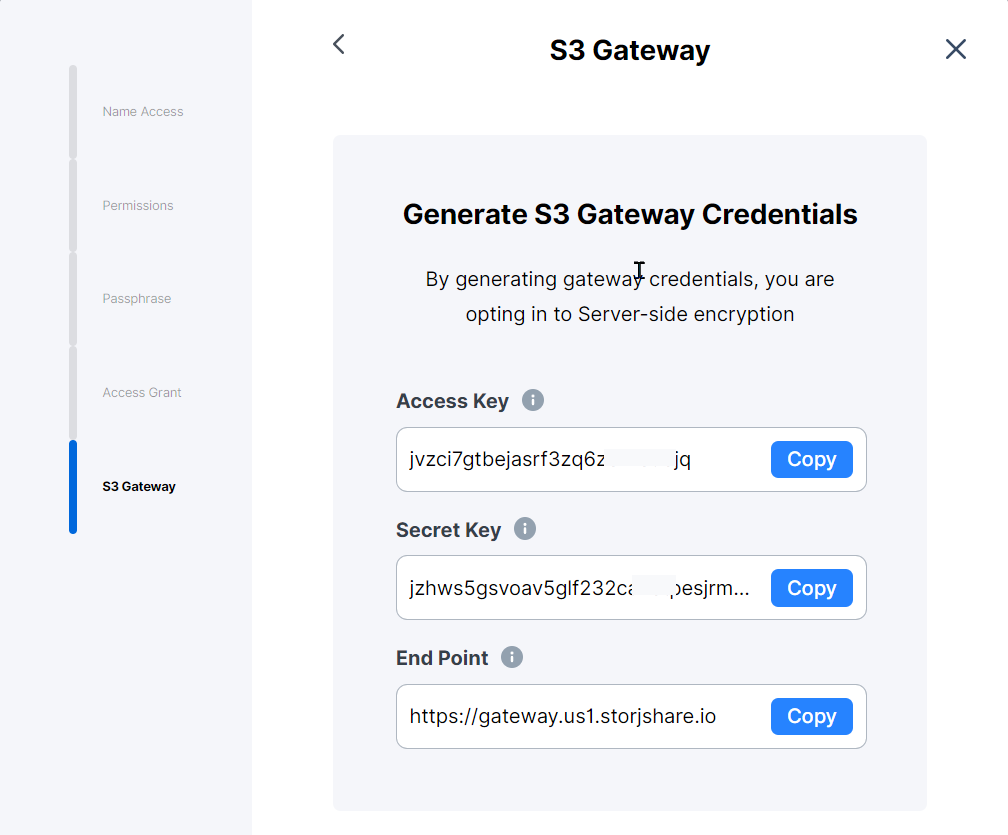 5.   Now we’re ready to go and move to the Plesk side. Go to the Domain or Subscription and select “Backup Manager”: 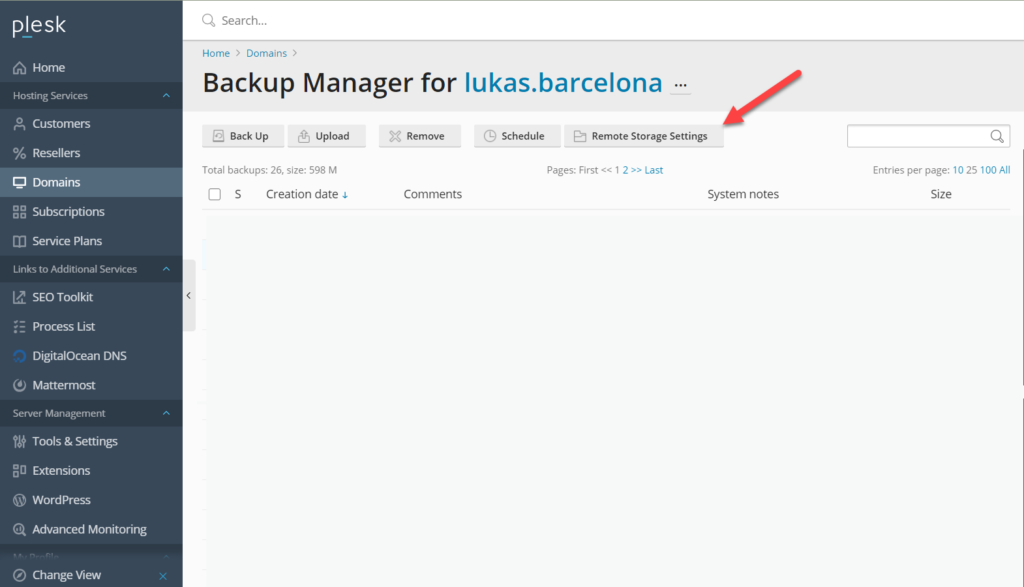 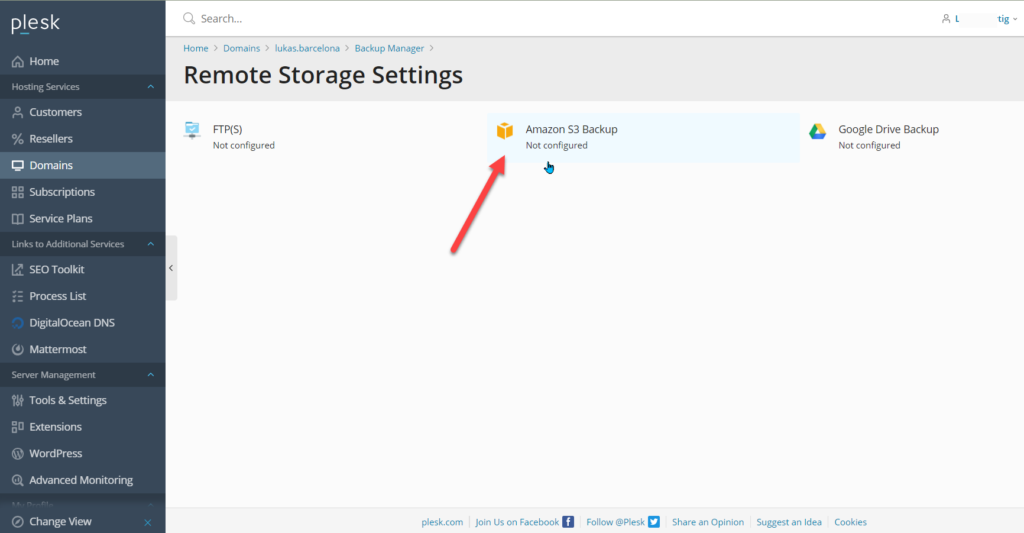 8.  This one is important to get right: 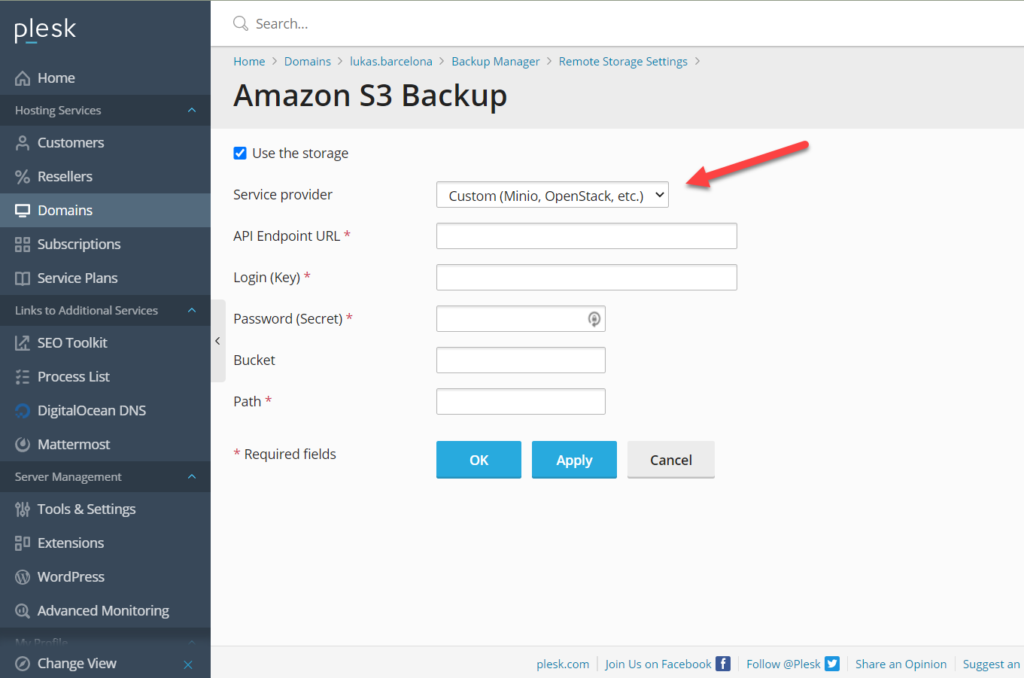 9.   Then press “OK” and we’re good to go for our first backup. Go back to the Backup Manager in Plesk and select “Back Up”. Make sure you select either to store in just the remote backup location or in a combination of the local and the remote location. 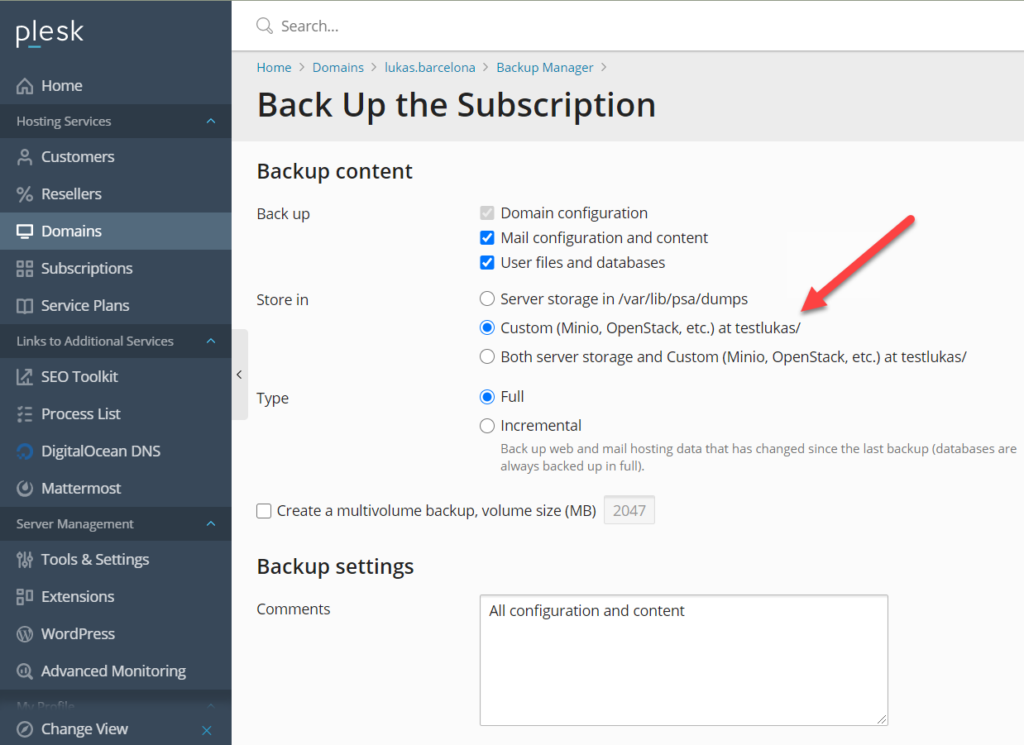 Once you click “OK” we’re backing up into Storj!

10.   Now, every Backup is only as good as its restoration if things go wrong. So let’s try to restore the backup that we have just made into Storj. Click on the Backup that you have made: 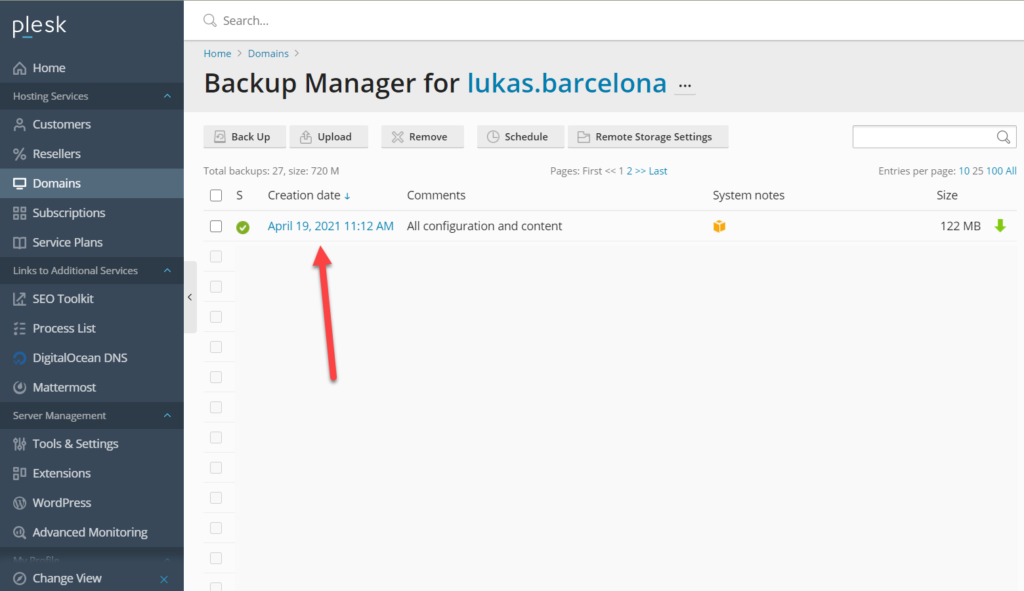 11.  Select “All objects (entire system)” for the restore, but you are free to also use any other options including selective restore. Then click on “Restore”: 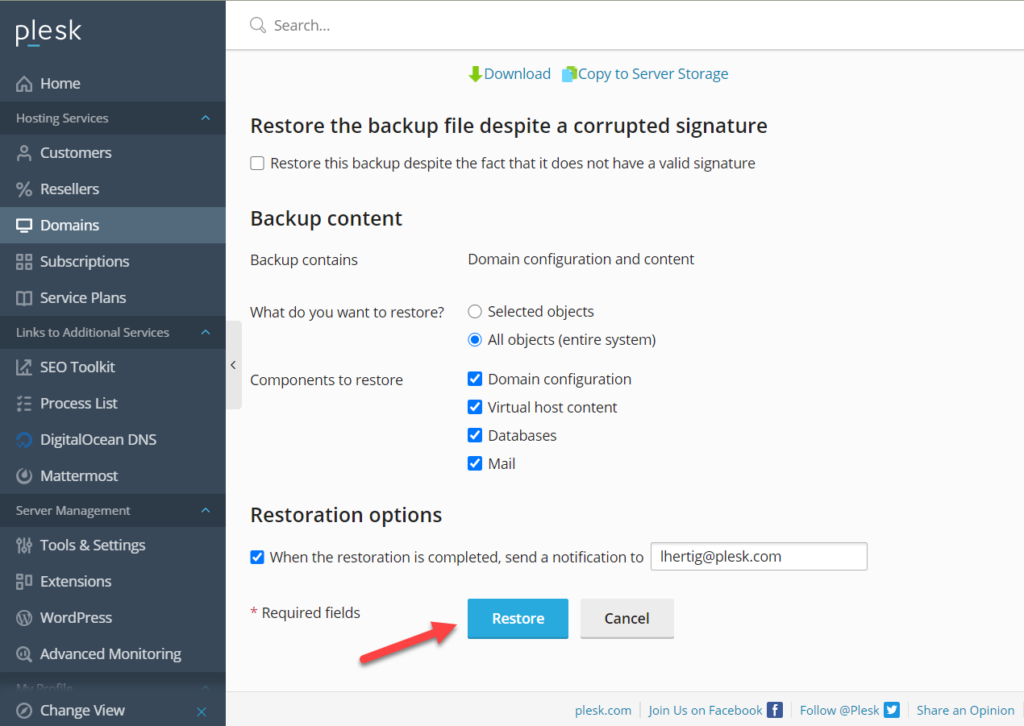 12.   Congratulations! Your first backup from Storj has been successfully restored: 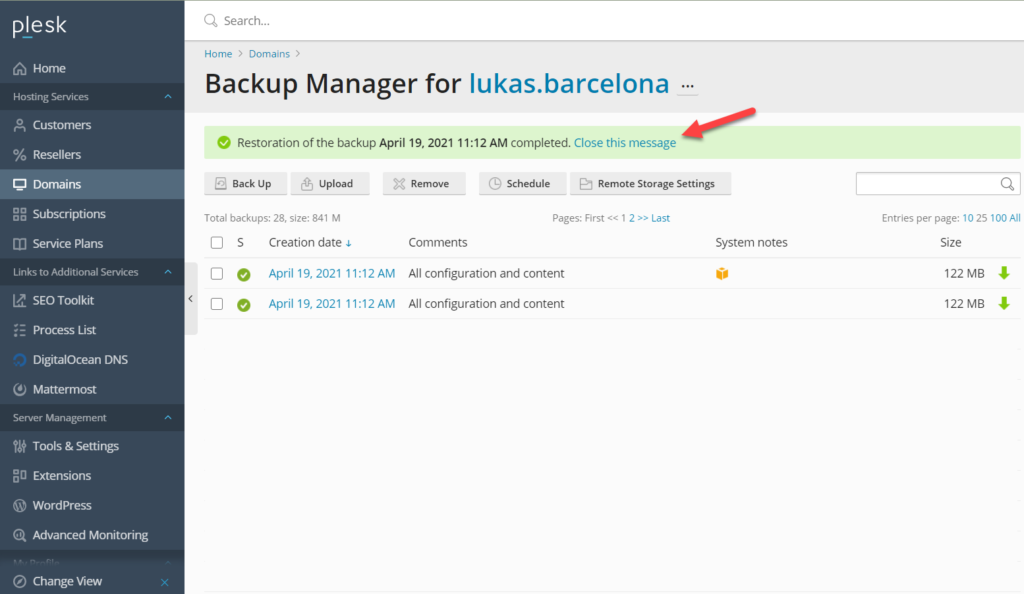 As we are extending the partnership with Storj and the WebPros group, you may also use the same functionality as above in cPanel. You can refer to this video to check out how to do this.

In addition, we are also closely working with the Storj team for an auto-installation of the agent on your server so you can’t only use their storage service but also become an active Node in their network. With this feature, you could then also earn money with your Plesk or cPanel server. Storj pays Node Operators for their unused storage and bandwidth, so anyone can monetize their under utilized devices. But details on that follow soon – keep watching this blog for updates.

Want to try Storj yourself now?

If you are ready to try Storj DCS, sign up free to take advantage of their offer of 150 GB of capacity and bandwidth across 3 projects (50 GB each). 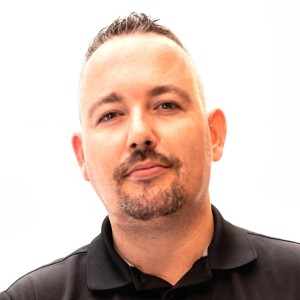 Backup Importance, Its Types And Strategies

#6 reasons why you need to update Plesk now

How to Schedule Automatic Backups to Cloud Storage

Is that possible to use custom S3 compatible storage for backups?

Is there a way to create a backup to an FTP storage without using local storage?

How to download a full backup of plesk (not only the .xml file, but the full server backup)