Stack Overflow, perhaps the most prolific question-and-answer site for developers, conducts an annual survey of its user base. This year, more than 50,000 respondents in 173 countries contributed to the survey.

I deep dived into the huge amount of data to bring you the most surprising insights from it. Of course, I have to start with the most relevant data this year’s survey collected—whether developers prefer Star Trek or Star Wars.

Devs in their 40’s (that would be me!) prefer Star Wars whereas devs in their 50’s are diehard Trekkies.  I think it’s important to note that Firefly was the top write-in, followed by Stargate, Doctor Who, and Babylon 5. 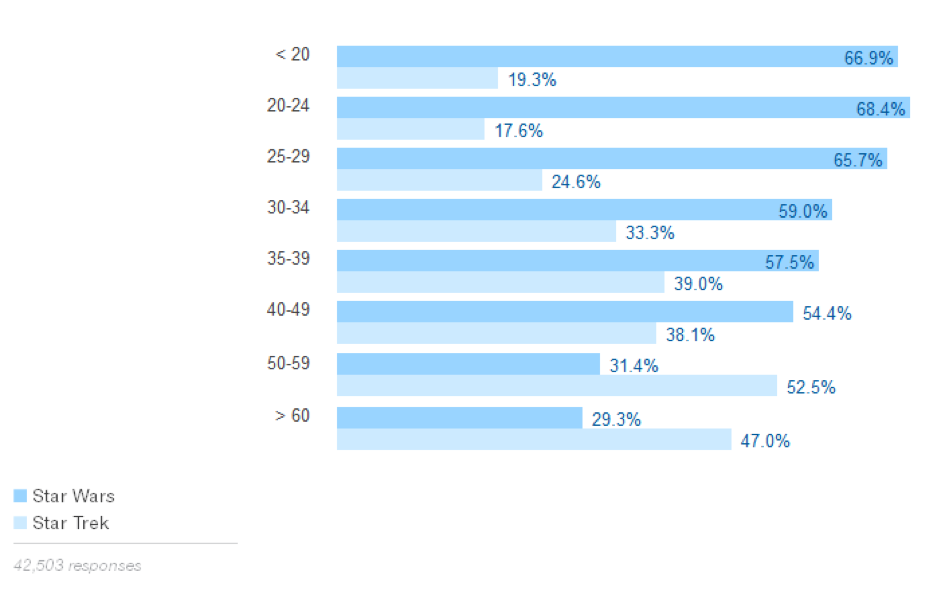 How many professional developers are at Stack Overflow?

¨Professional developers, Stack Overflow estimates 16 million of those people are.¨ [1] 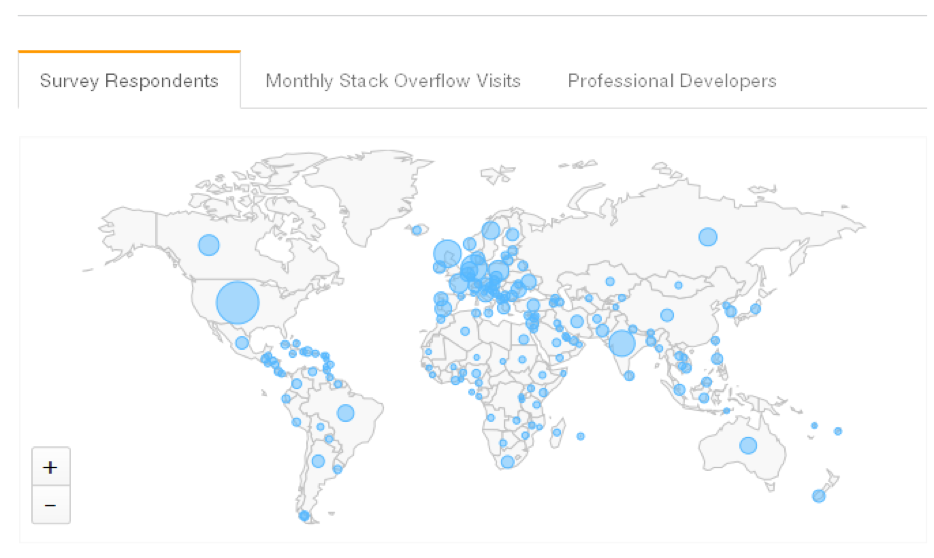 In January 2016, 46 million people visited Stack Overflow to get help from or give help to a fellow developer. Stack overflow estimates 16million of those people are professionals.

Everyone is “full-stack” now

“Much to learn you still have.… This is just the beginning.¨ 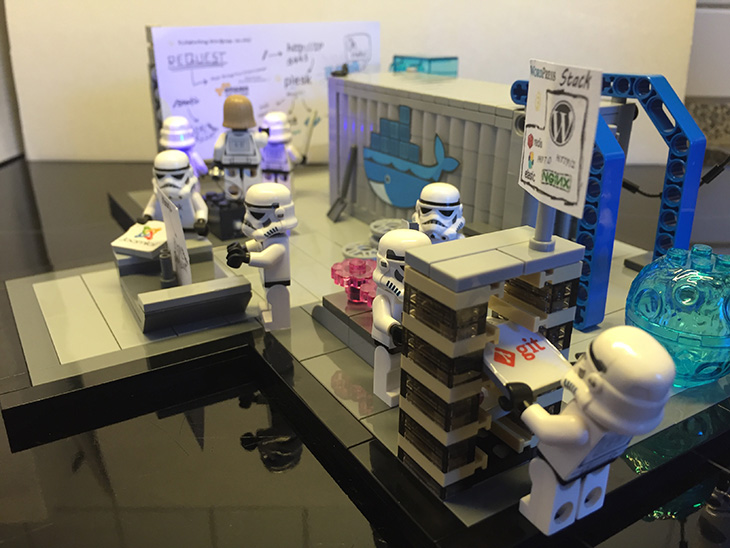 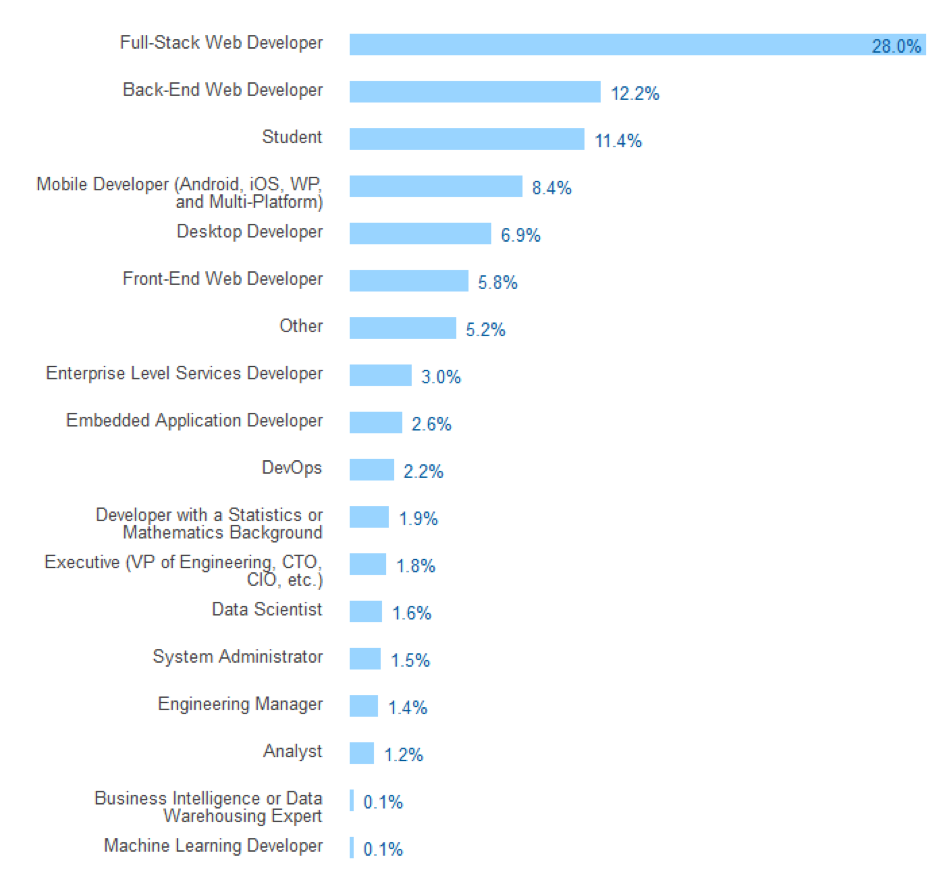 A full stack developer will benefit from knowing more programming languages as the basis for future growth.

“The most commonly used programming language on earth, Javascript is.  Hmmmmmm.” 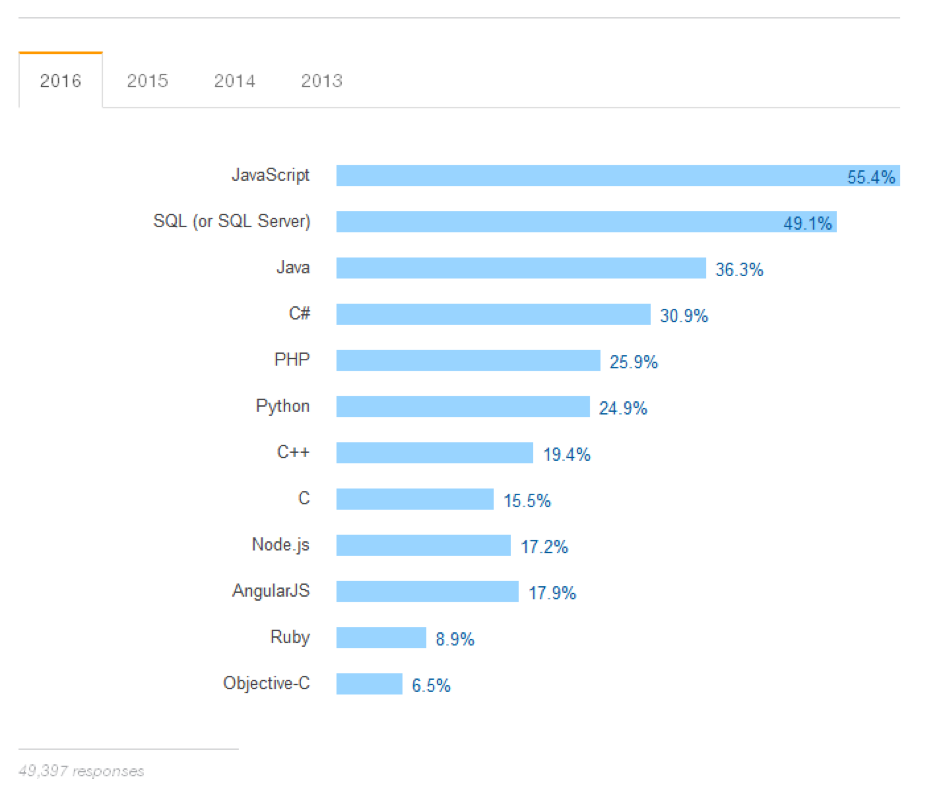 JavaScript is still the most extensively used tool, with more than 55% of people saying they use the language. It’s popular with developers who specialize on the front end. SQL has declined a bit in popularity, due in part to the rise of NoSQL databases like MongoDB, which uses JavaScript as its querying language instead of SQL.

Most Popular Technologies per Dev Type

“Growing in use, newer web-development technologies like React, Node.js, and AngularJS  are.  Yes, hmmm.” 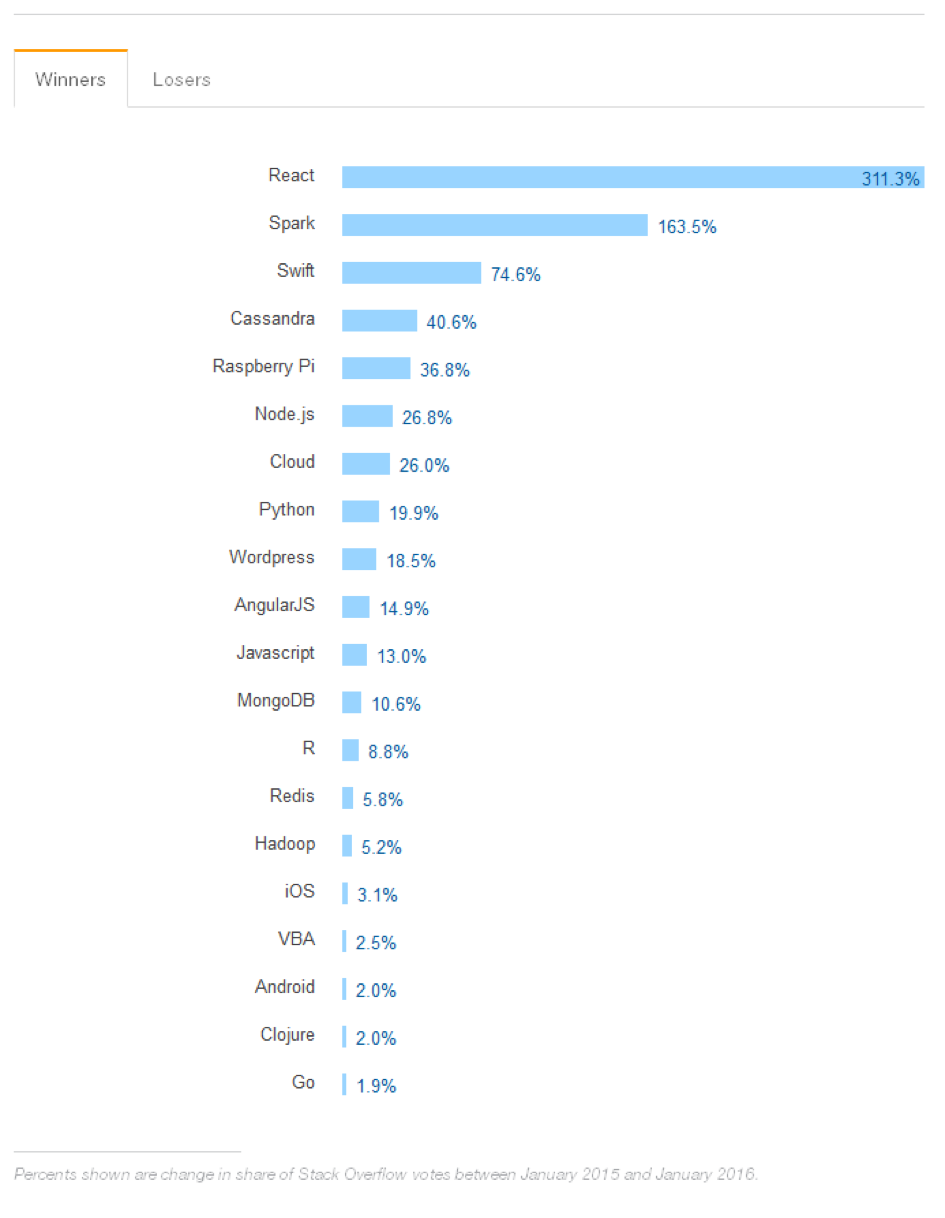 Newer web-development technologies like React, Node.js, and AngularJS are growing in use. So is Swift, which is stealing market share from Objective C.

Developers appear to be dropping CoffeeScript, Haskell, and Windows Phone. And though the survey showed many developers want out of Visual Basic and WordPress, those technologies don’t seem to be shrinking just yet. 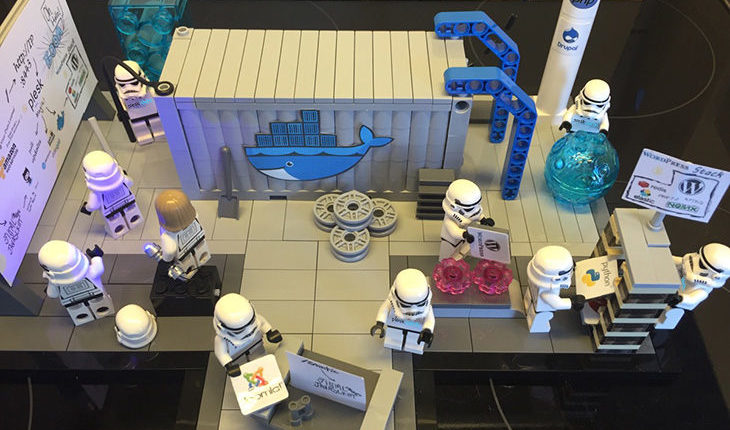 Every so often a new technology appears and disrupts the status quo. Docker is rapidly changing the rules of cloud and upending the cloud technology landscape. Smoothing the way for Microservices, open source collaboration, and devops, Docker is changing both the application development lifecycle and cloud engineering practices.

Last year, Mac edged ahead of the Linuxes as the number 2 operating system among developers. This year it became clear that trend is real. If OS adoption rates hold steady, by next year’s survey fewer than 50% of developers may be using Windows.

Speaking of the Linuxes, Ubuntu is tops among them with 12.3% of the entire OS market for developers. Fedora, Mint, and Debian accounted for 1.4%, 1.7%, and 1.9% of all responses, respectively. 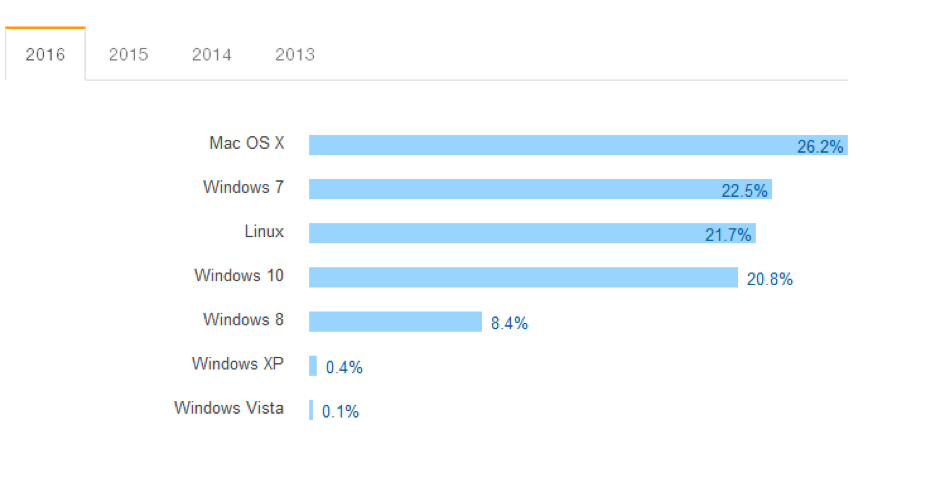 “Partly Self-taught, 69% of developers said they were.  Yesssssss.” 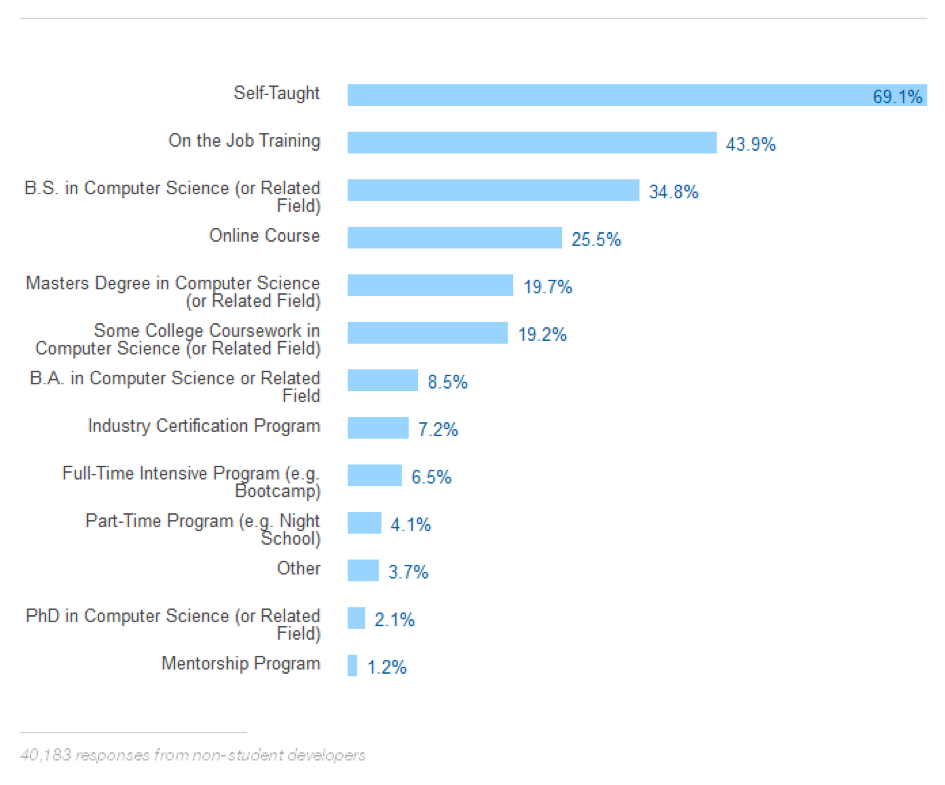 The survey results show that we do not have enough women in tech. This is news to no one. But a 15-to-1 ratio of males to females? This is much wider gap than most people realize. And looking at the age distribution of female developers sheds some light on why.

There are far fewer female developers in their 30s and 40s.

“When nine hundred years old you reach, look as good you will not.” 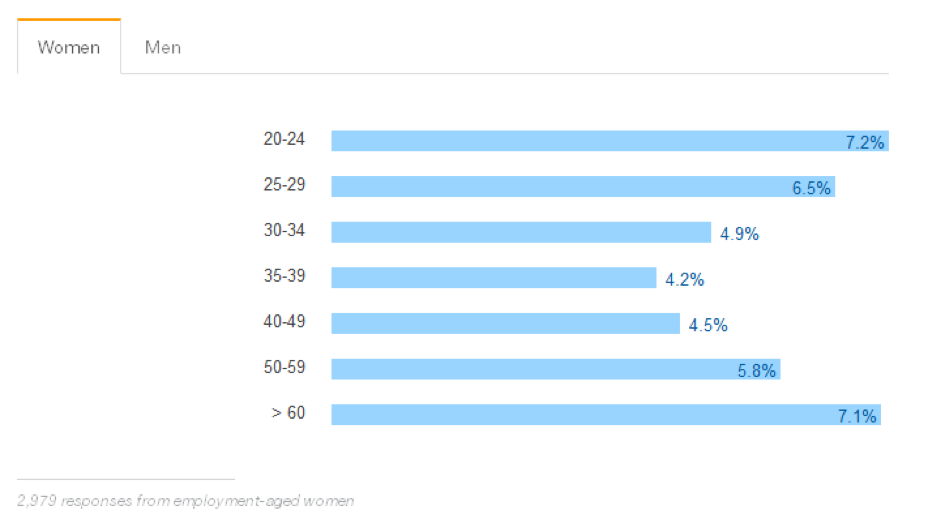 Most female developers are either in their 20s or over 50+ years old. While women make up about 6% of total respondents, they make up an even smaller percentage of respondents in their 30s and 40s. On the other hand, this indicates that a generation of women might’ve chosen not to work in software development or tried it and evolved to other positions within their organization.

Unrealistic expectations are the most common workplace gripes. 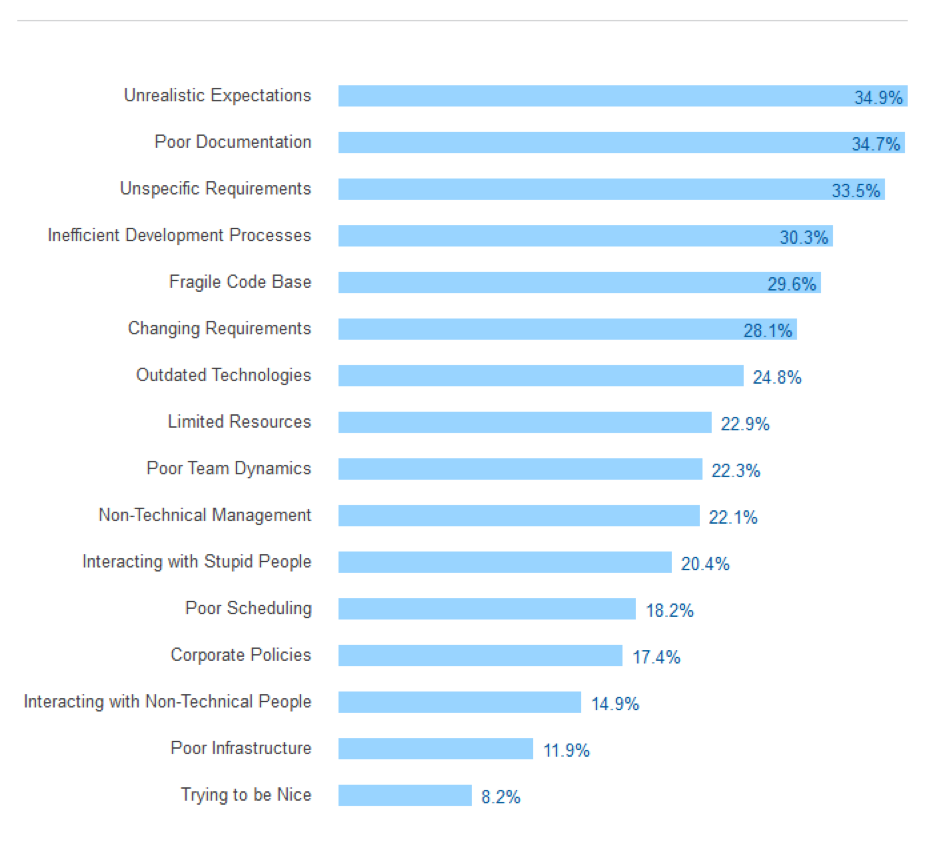 When asked about the biggest challenges at work, the respondents answer “unrealistic expectations” the most often (35%) while “poor documentation” (35%) and “unspecific requirements” (33.5%) were close behind. Developers feel these challenges increase as they become more experienced.

May the Force Be With You!

Please share if you enjoyed reading through these findings. You can check out the full Stack Overflow survey here.

[1] All quotes provided by Jedi Jörg Daydream – A Padawan Learner from Nubia …it’s powered by Plesk! 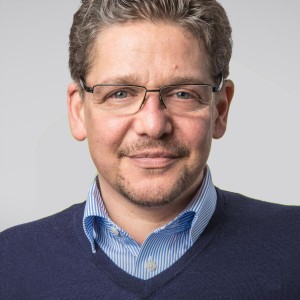