Linux logs give you a visual history of everything that’s been happening in the heart of a Linux operating system. So, if anything goes wrong, they give a useful overview of events in order to help you, the administrator, seek out the culprits.

For problems relating to particular apps, the developer decides where best to put the log of events. So with Google Chrome for instance, any time it hangs, you want to look in ‘~/.chrome/Crash Reports’ to discover the gory details of what tripped the system up.

Linux log files should be easy to decipher since they’re stored in text form under the /var/log directory and subdirectory. They cover all kinds of things, like system, kernel, package managers, MySQL and more. But now, we’ll focus on system logs.

To access the system directory of a Linux or UNIX-style operating system you will need to tap in the cd command.

How can I check Linux logs?

You can look at Linux logs using the cd /var/log command. Type ls to bring up the logs in this directory. Syslog is one of the main ones that you want to be looking at because it keeps track of virtually everything, except auth-related messages.

You also use /var/log/syslog to scrutinise anything that’s under the syslog. But picking out one particular thing will take some time because it’s usually a pretty big file to wade through. Pressing Shift+G will take you all the way to the end, and you’ll know you’re there because you will see the word “END.”

You can also check logs using dmesg. This shows the kernel ring buffer and prints everything after sending you to the end of the file. You can then use the dmesg | less command to scroll through everything it has produced. If you’d like to see log entries relating to the user facility, use dmesg –facility=user.

Finally, as a super-handy command called tail, which lets you look over log files. It’s so useful because it just displays the last bit of the logs. Which is often where you’ll find the source of the difficulty. Use tail /var/log/syslog or tail -f /var/log/syslog. Tail keeps a close eye on the log file, and displays every written to it, which lets you check what’s being added to syslog in real time.

For a particular group of lines (say, the last five) type in tail -f -n 5 /var/log/syslog, and you’ll be able to see them. Use Ctrl+C to turn off the tail command.

Most directories can be grouped under four headings:

Checking each log is a really enormous task. So that’s why developers rely on log data checking tools like Retrace. Because they put APM and log management right at your fingertips. You have plenty of choice over what you want to monitor. But there’s little doubt that scrutinising the following should be considered essential.

What’s in these Linux Logs?

Does Plesk for Linux keep logs too? 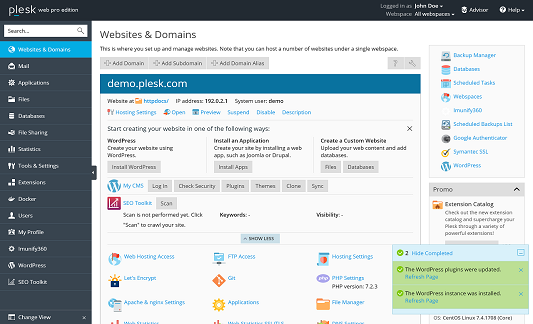 As a Linux-friendly hosting panel, Plesk uses log files for a wide range of software packages that run under Linux in addition to its own logs. The following list shows the location of Plesk logs. And we hope it helps you fix issues.

It’s important to understand the advantages and limitations of logging. But which Linux logs do you think demand most attention? We’d love to hear your thoughts in the comments below.

How To Find a File In Linux From the Command Line

How to access the Plesk psa database in MySQL

Messages about failed logrotate task are received in Plesk on Ubuntu 18 or Debian 9: ‘Access denied for user ‘root’@’localhost’ (using password: NO)